Keeping the kids (and in-laws) entertained in Bowling Green, Kentucky 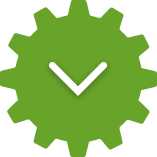 “What do you do for fun?” Even though I had ideas, I asked this question of my husband, DJ, our nine-year-old twins, Grace and Tate, and Joe and Sue, my in-laws. Answers ranged from reading historical nonfiction to spending time in nature and playing with animals. DJ had suggested a vacation, so I conducted the poll to maximize fun for all of us.

A few weeks later, Mammoth Cave National Park was in our rearview mirror. In 24 hours we’d graduated from walking to trotting at Jesse James Riding Stables, giggled alongside the Laughing Kookabura at Kentucky Down Under and even zipped through the canopy at Hidden River Cave, Zip & Rappel . But our vacation was just beginning. Bowling Green welcomed us even deeper into cave country. 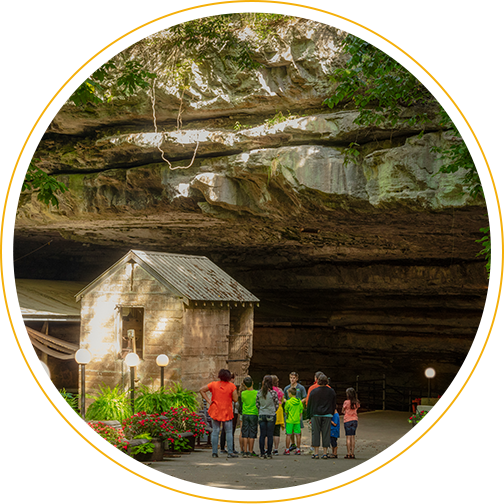 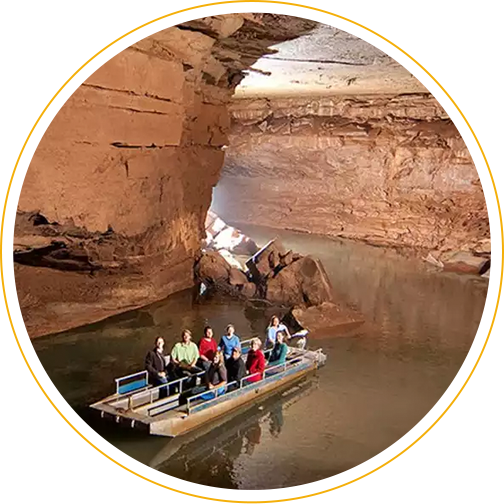 “The last time we were in a boat in a cave was at Disneyland,” Tate noted before describing the Pirates of the Caribbean ride to his grandparents. Embarking on Kentucky’s only underground cave boat tour meant descending into the darkness at Lost River Cave. After spelunking in Mammoth Cave National Park the day before, my in-laws appreciated a more relaxed method of cave exploration.

“I remember reading this cavern was a nightclub in the 30s,” Sue said as we set off.

Our tour guide nodded and told us the cave is a constant 57°F. “They advertised it as the state’s only “air-conditioned” club,” he said when Joe asked him the benefit of an underground venue.

Lost River Cave is as historical as Pirates of the Caribbean is theatrical. Thousands of Union soldiers had camped and trained there during the Civil War. As our boat motored deeper into the cave, Tate and Grace scanned the walls and ceiling, and searched for any markings left by soldiers. Our eyes adapted to the dark and our other senses became heightened. The surreal, albeit relaxing, world continued to envelope us, and we went willingly. My in-laws’ enthusiasm for history was contagious.

“How did that compare to Disneyland?” DJ asked when the tour was over.

“Grandma and Grandpa weren’t there, so this was cooler,” Grace said. 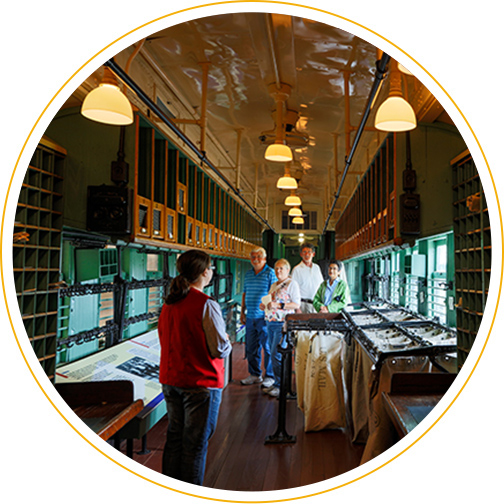 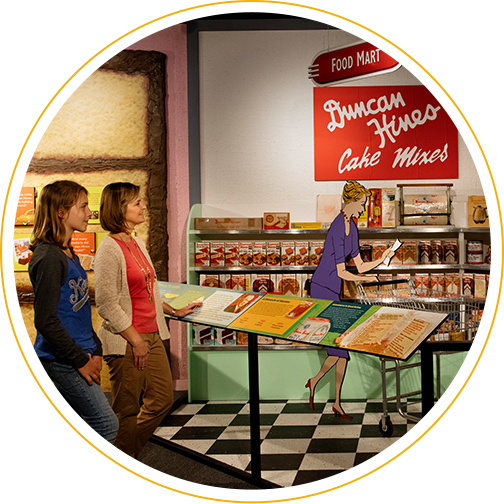 An amusement park and enlightening museums

“We’ll have to come back for that next summer,” DJ noted. “Today, we’re museum hopping.” At the mention of museum, Tate rolled his eyes.

An hour later, those same eyes were fixated on sleek, polished, new and classic cars at the National Corvette Museum.

“Never underestimate the cool-factor of a museum,” DJ sagely remarked.

Afterward, we checked out the restored railcars at Bowling Green’s Historic Railpark & Train Museum. The kids listened to audio of different train sounds and Grandpa telling them about his father’s experience going cross-country by train.

At the next museum on our list, we got an even more vivid picture of traveling “back in the day.” Somewhere between the Kentucky Museum’s Gazing Deeply: The Art & Science of Mammoth Cave exhibit and its gallery of children’s artwork, we discovered an interactive homage to Duncan Hines. Apparently, before this Bowling Green native made it big in the food industry, he wrote restaurant and motel guidebooks for travelers.

“My mom had a copy of his first Adventures in Good Eating,” Sue told us.

“That would be your great-grandmother Gemma,” DJ said, introducing the kids to his late grandmother.

If I had to sum up our last day in Bowling Green, “adventures in good eating” almost does it justice.

We knew we’d reached Chaney’s Dairy Barn, just seven miles out of town, when we saw a billboard with a cow eating an ice cream cone while holding a sign reading, “Udderly Delicious.” Of course, in addition to serving substantial sandwiches featuring generous layers of meat and cheese, Chaney’s Dairy Barn specializes in homemade ice cream. The kids were ready for dessert right after lunch, but Sue suggested we wait.

“Let’s tour the farm first so we can see where ice cream comes from,” she said, eyeing her husband who was eyeing the tractor along the path down to the self-guided barn tour.

“I learned how to drive my dad’s John Deere when I was about your age,” Joe told the kids, attempting to transport them back into the 1950s. DJ nodded. Clearly, he’d heard this story before.

Inside, the Tour Barn was Old MacDonald meets The Jetsons. After admiring a Jersey calf with almond-shaped eyes and lashes so long and thick you could paint with them, we met the Lely Astronaut robot that helps milk the cows. The farm has been in the Chaney family since 1888, but has evolved with each new generation, now processing its own milk for retail.

“I don’t know if Grandpa should drive us back into Bowling Green,” Sue pointed out while we ate our ice cream cones. A whiff of Joe’s Bourbon Crunch hinted at Maker’s Mark.

“When in Kentucky,” Joe said laughing, not missing a beat. The kids seemed content with their Cookie MOOnster decisions, but I knew they’d eventually want some of the Moo Pie I was splitting with DJ.

“Sharing is caring,” Grace said, batting her eyelashes in a futile attempt to look as cute and innocent as the Jersey calf.

Our answer is Bowling Green

As we left Bowling Green that night, I began to wonder if I was asking the wrong question of my family all along. Maybe it’s not, “What do you do for fun?” Perhaps, it’s “Where do you go for fun?” It looks like we have an answer in common now.

Have some fun in Bowling Green.