Open daily from dawn to dusk.

A memorial to all distinguished aviators who have called South Central Kentucky home, Aviation Heritage Park currently features six restored military aircraft with very compelling ties to local aviators as well as their own interesting stories. The park is free to the public, but donations are appreciated to help support a capital campaign to build a museum or for ongoing restoration efforts.

The premiere aircraft is a F-4D Phantom II 550, a plane with historic significance. Brigadier General Dan Cherry, a Bowling Green native, was at the controls on April 16, 1972 when he shot down a North Vietnamese Mig-21 during the Vietnam War. An amazing story of reconciliation regarding this fateful day is told by Cherry in the book, "My Enemy, My Friend," available in the Visitors Bureau's gift shop.

The second plane to join the display was a Grumman F9F-5 Panther. It is a representation of the plane Johnny Magda, Kentuckian, WKU alumnus, Commander of the Blue Angels and Korean War hero, flew.

Also on display is a Lockheed T-33 Shooting Star, dedicated on October 22, 2011. The plane honors Gen. Russ Dougherty, a Glasgow native who flew more than 70 types of aircraft and commanded the Strategic Air Command during the Cold War. The T-33 also bears the name of U.S. Air Force Capt. Robert E. Mitchell who was killed in the same type of plane during a training exercise in 1962.

"Landing" in October 2013 was a USAF F-111 honoring Bowling Green native Col. Arnie Franklin, who led the 1986 USA"F raid on Libya. This particular plane was a part of that raid and was also the exact plane to drop the last bomb on the last night of the Desert Storm War.

In September 2014, AHP welcomed a NASA T-38 Talon to its collection, only the 12th site for public display of this particular type of aircraft. It was the world’s first supersonic trainer primarily used by the USAF before NASA astronauts began using them for necessary travel and as chase planes. This T-38 will be on display in honor of local astronaut Terry Wilcutt.

Most recently, a UH-1 Huey Helicopter, the most widely used helicopter in Southeast Asia, joined the display. This particular Huey on loan from the National Museum of the USAF was approved to be specially restored in U.S. Army livery for the purpose of honoring Colonel Raymond T. Nutter.

Other planes are in the works, so check back often for updates. 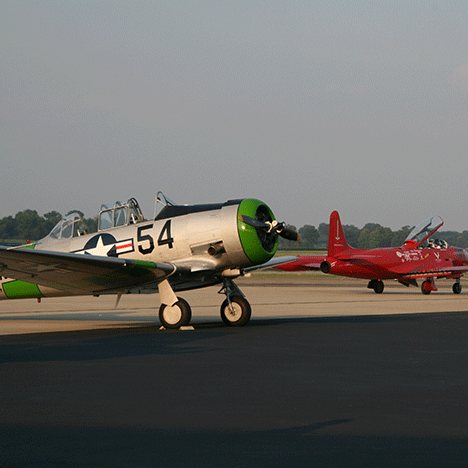 You know your family won’t want to miss AHP’s annual Hangar Party. The next big Hangar Party is... Read More